We believe that we have more future pro's in our junior tennis program right now!

This belief requires a "Best Practices" philosphy that separates our Junior Tennis Program from all of the others.
Everyone in our program benefits tremendously from the constant continuing education required of our staff to get even a few players to the professional level.

We have players in our program who have been playing on the men's and women's ITF Pro Circuits
since 2009 and who now hold current ATP and WTA world rankings in the Top 500.

Make an appointment with Paul Kobelt for details (614 395-4394) and to start planning
your exciting journey today.

Congratulations to Alex Kobelt for earning his FIRST ATP POINT!

Alex, a senior on the OSU Men's Tennis Team, just earned his first ATP point in Netanya, Israel on June 11.
He won three qualifying matches and then won his first round match in the main draw.

Alex is the third Kobelt and the fourth NATC Alum to achieve a world ranking on the Pro Tour.

Maddie just won 3 Professional Doubles Tournaments in a row with 3 Different Partners!
This may have never been done before - still checking!
Akko, Israel with Maya Tahan (ISR), May 5
Sajur, Israel with Iva Primorac (CRO), May 12
Tiberias, Israel with Riya Bhatia (IND), May 19
These were her 8th, 9th, & 10th Pro Doubles Titles, with 10 Different Partners.
Almost 4 in a row: Maddie also made the doubles finals in Cairo, Egypt, April 29

Maddie is back in New Albany & Available for Private Lessons!

2016 On the Pro Tours:
Since July, 5 players who train at NATC have won 7 Professional Doubles Tournaments:

DJ trains nearly every day at NATC with his own team of coaches and other ATP touring pros, including former Buckeye Chase Buchanan,
who is now also on our staff at NACT and will be teaching many of our clinics this winter. Having DJ, future buckeye JJ Wolf,
current ATP players Blaz Rola, Connor Smith, Ralf Steinbach and Peter Kobelt, and their coaches at our club is amazing
and an incredible learning experience for our NATC Staff and all of our players who watch them train.

Be sure to give them all a "high five" whenever you see them training at the club.

April 28, 2016:
Congratualtions to NATC/KTA Alum Maddie Kobelt for winning her 2nd Career Futures Pro Doubles Title in Hammamet, Tunisia.
With this win, her WTA world ranking in doubles will move up to 630.


March 26, 2016:
Congrats to NATC/KTA Alum, Peter Kobelt, for winning his 2nd Pro Futures Singles Title!
He made it thru a very tough draw with wins over 4 players who have been ranked in the top 300, ATP.(photo on right with his Coach Julian Olivari).
With this win Peter's world singles ranking has now risen to ATP # 335. 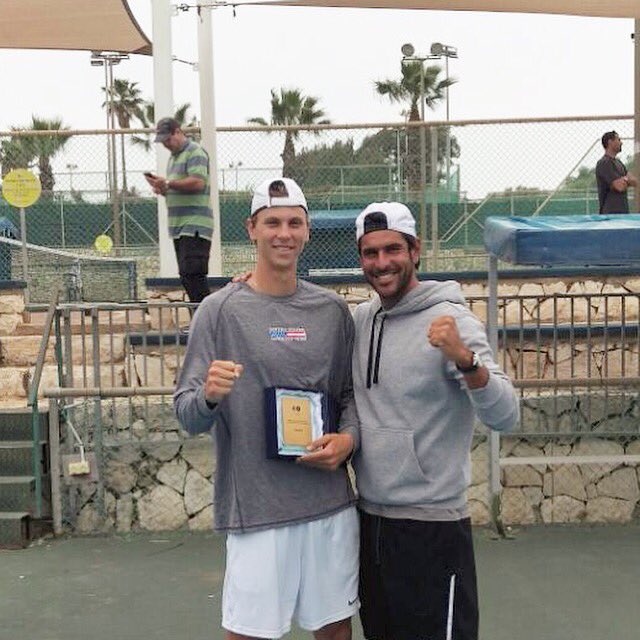 Congratulations to NATC/KTA alum, Peter Kobelt, for being selected as a US Davis Cup Practice Partner
for the tie vs Australia in Kooyong, Australia! He spent the whole week as the sparring partner
for John Isner, Jack Sock and the Bryan Twins. Team USA won 3-1! 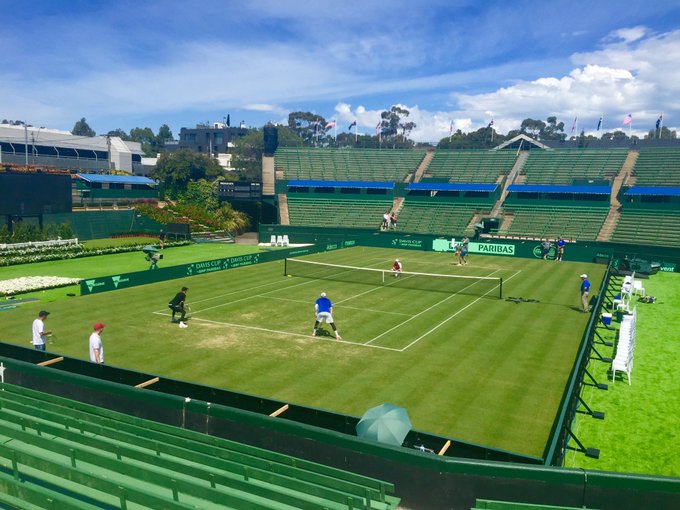 November 21, 2014: Recent Success of  Kobelt Tennis Academy ATP Touring Pro, Peter Kobelt,
Prompts a Visit From USTA National Coach, Stephen Amritraj.
Coach Amritraj is responsible for identifying and working with up and coming American professional players who have the potential to reach the Top 100 on the ATP Tour.
He made his first trip to Columbus to work with Peter for 2 days to help him prepare for his next 3 tournaments in
the Dominican Republic in December. He was very impressed with NATC / KTA's level of coaching expertise and the surprising
number of highly skilled players coming out of such a small community. Three players who learned how to play tennis in New Albany
participated in the 2014 US Open, more than many countries.

For Competing in his First Grand Slam, the 2014 US Open!

Feb 7, 2013: NATC/KTA welcomes Maryeni Gutierez Soto, our first international full-time student. Maryeni, a 23 year old native of Venezuela, is training at Kobelt Tennis Academy and competing on the professional WTA tour through the end of 2013. Maryani played D-I college tennis at Lamar University and is currently the #12 ranked woman in Venezuela.

We are thrilled to have a player of her caliber training 4-5 hours every day at our Academy. While Paul is her primary coach, she also trains with all of our coaches and in all of our HP-CTC clinics throughout each week.

Our top juniors have already begun benefiting tremendously from training with Maryani and observing her incredible work ethic first hand. Her determination to play more aggressivley every day, make every shot and never give up on a point is amazing to watch and very contageous. Maddie Kobelt has been playing USTA / ITF Pro Circuit tournaments since 2009 when she committed to play
her college tennis for Coach Luke Jensen at Syracuse University. In addition to currently playing #1 singles and
# 1 doubles for Syracuse, Maddie also plays up to 15 pro tournaments each year.

In 2012 she reached her highest WTA doubles ranking of  #1171, winning main draw matches with 3 different partners. Her best singles results were a 6-4, 6-2 win over #884 Brazilian Yasmine Guimaraes in Bethany Beach, Maryland, and a close, 3 set loss to # 489 Piia Suomalainen of Finland in Saguenay, Canada.